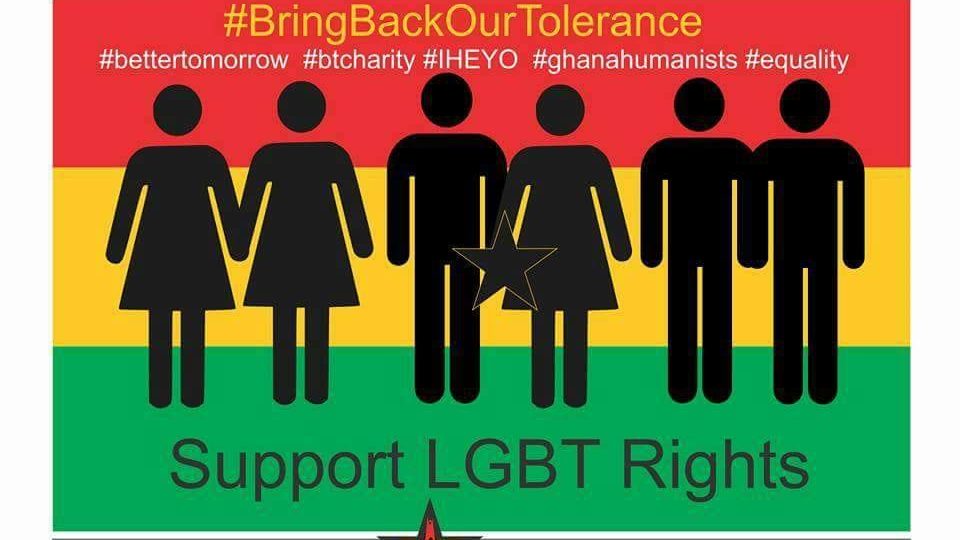 In a recent interview, with regards to homosexuality, you insinuated thatAfricans are increasingly becoming fed up with external forces trying to force alien cultures on them. We the members of the Humanist Association of Ghana (HAG)  are deeply disappointed with these comments as they do not reflect the views of all Ghanaians and the spirit of our constitution.

Your appointment to the position of Speaker and third most powerful person in government requires that you represent the citizens of Ghana without bias but with care and moderation. However, you have been consistently expressing your homophobic views at every turn and we would not stand by and watch you continue to dehumanize the Lesbian, Gay, Bisexual, Transgender, Queer and Intersex (LGBTQI) community.

“It is becoming a human right in some countries. The right to do homosexuality. The right for a human being to sleep with an animal. We are tired of some of these things and we must be frank about it. I think all these matters need to be seriously interrogated.” You said this as reported onafricanews.comto representatives of Amnesty International on 4thof July, 2017.

Secondly, homosexuality is in no way related to bestiality and we find that comparison to be without merit and irresponsible. Homosexuality has to do with two consenting human adults of the same gender being attracted to each other regardless of physical intimacy. This tactic of muddying the waters is designed to mislead the public  and is rooted in ignorance. It is a gross mischaracterization of decent LGBTQI Ghanaians and attempts to make it easier to demonize this already marginalized group in our society. Insinuating that giving rights to homosexuals will mean we have to give rights to people who have sex with animals is troubling and fallacious.

We agree with you that these matters need to be interrogated. There is an excellent tool for interrogating all matters and that is through scientific discovery and healthy intelligent debate. What is the basis for your claims that homosexuality and bestiality are related? Would you consider apologizing to the general public if you do not have any evidence for your claims and for misinforming the general public from your position as a public servant?

Sir, you have the opportunity to clear the air on some questions your statement has raised. Which country or organization is asking Ghana to legalize bestiality? Which country has legalized bestiality since legalizing homosexuality? You must realize, Sir, that as a person of privilege in a powerful position, your utterances carry a lot of weight and could be dangerous and detrimental to the well being of many citizens in this country. Your views are capable of affecting the people of the LGBTQI community as well as their families, friends and the economy of this country.

Human Rights Watch notes that two countries, Benin and the Central African Republic, do not outlaw homosexuality. Homosexual activity between adults has never been criminalised in Burkina Faso, Ivory Coast, Democratic Republic of the Congo, Djibouti, Equatorial Guinea, Gabon, Madagascar, Mali, Niger, and Rwanda. Since 2004, Mauritius, Sao Tome and Principe and the Seychelles have decriminalized homosexuality. Other African countries such as South Africa, Cape Verde, Burundi and Mozambique have removed the colonial British law and decriminalized Homosexuality with some even introducing anti-discrimination laws and allowing gay marriage and adoption.1Homosexuality is not alien to Africans. Homophobia is rather alien to Africans and is clearly a colonial import. Ghana should be looking at being the beacon of human rights in Africa by spearheading rights for all minorities including the LGBTQI community. There is scientific evidence to show that homosexuality is natural. Countries that have come to accept this have become more tolerant and are treating their LGBTQI communities with the respect and dignity they deserve.

The current Pope, Pope Francis, recently stated that“Christians must apologize to gay people for marginalizing them”and in 2014, demoted an anti-gay Cardinal from the Catholic Church.2Archbishop Desmond Tutu referred the oppression of homosexuals as the “new Apartheid”. Many Christians around the world have come to understand that love between two consenting adults should not be punished or discriminated on in any way but rather accepted and tolerated. This, for them, is the true mark of a good Christian.

Sir, if your focus is on sexuality, may we draw your attention to the pervasive rape culture and the sexual abuse of mostly women and children perpetrated by mostly heterosexual men; an issue which we believe is not being tackled but rather normalized.

The LGBTQI activist groups in Ghana and members of the LGBTQI community are only asking for tolerance, respect, acceptance, non-discrimination and the right to life. We hope that our Honorable Members of Parliament led by your Honorable Self, will look at the matter of criminalization of our citizenry based on their sexual orientation critically and objectively. We plead with you to take your time in coming to decisions on the well being of all citizens of this country devoid of personal feelings, superstitious beliefs and emotions. We ask you to critically analyze the implications of targeting people both young and old based on their sexual orientation and the effects that inflammatory statements made by people in power may have on innocent citizens.

Members of the Humanist Association of Ghana

We invite you to learn more about Humanism in the Amsterdam declaration http://iheu.org/humanism/the-amsterdam-declaration/