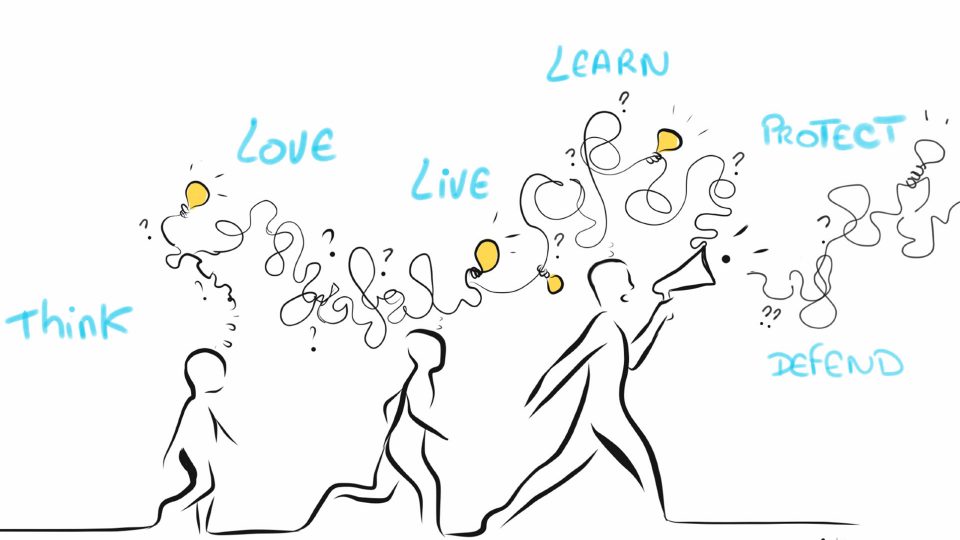 Morality – the principles concerning the distinction between right and wrong, good and bad, ethical and unethical – has always been at the top of philosophical discourse. For as long as we have been asking questions, and discussing ideas, we has been fascinated with the concept of right and wrong. The many moral theories – a framework upon which we think and discuss in a reasoned manner allowing evaluation on specific moral issues – not only help describe how thoughts are formed around issues of morality, but also prescribe how our actions including thoughts should be shaped. Before getting into my personal stance on morality, let us walk the path of the various frameworks I have come across. These may not be exhaustive.

The most common I have heard is the Divine Command Theory. This framework claims that there is a connection between morality and religion and that without God(s) there is no morality. The conclusion drawn from this framework is that right and wrong comes from the commands of God(s). In other words, an action is right (obligatory) if commanded, wrong if commanded to be refrained from, and permissible if not covered in commandments. The obvious flaw to this is the presupposition that there is a God or gods or that we can know what they command. In Plato’s dialogue Euthyphro,he asks “Is the pious loved by the gods because it is pious or is it pious because it is loved by the gods?”.  If our belief is that actions are pious because it is loved by God(s) then pious actions or otherwise are independent of divine commandments. If we, however, think that pious actions are loved by the divine because they commanded it, we must conclude that right and wrong are but arbitrary dictates from the divine. If we, however, can agree that an action is right or wrong based on a reason, then the notion that it is arbitrary also goes out the window. Divine command theory falls under a group of theories known as deontological ethics in which the morality of an action is based on whether it is right or wrong based on a set of rules, rather than based on the consequences of the action. The opposite umbrella of theories is consequentialism which considers the moral worth of action as determined by its potential consequence.

Moral subjectivism tells us that right and wrong is determined by what we (the individual) think is right or wrong. Moral subjectivism ultimately denies the existence of any moral principle or the possibility of criticism outside the self. Thus one can not criticize actions outside self or take criticism from the outside.  Cultural relativism makes the same argument but replaces the individual with a particular set of principles or rules that the relevant culture happens to hold at the time. Similar issues of criticism and moral growth make subjectivity a less plausible framework. In addition, this implies that a person or a culture cannot be mistaken about what is right or wrong, and thus denies the possibility of moral advancement.  On the same wavelength as cultural relativism is Virtue Ethics which argues that right and wrong are characterized in terms of acting in accordance with traditional virtues that are considered to make one a good person. We run into the problem of cultural differences in what constitutes a virtue.

Similar to but largely different is Ethical Egoism; the argument that right and wrong is determined by what is in our (individual) self-interest. The idea is that we are driven by nature to act selfishly. Selfishness does not imply that we aim for hedonistic outcomes but that we may sometimes forego immediate pleasures for the sake of some long term goals. Ethical egoism does not also exclude helping others but assumes that people do so for selfish reasons.  To the ethical egoist, there is nothing like altruism. This is the greatest flaw in the argument; that a person who helps others at the expense of their self-interest is actually acting immorally.  If we agree that morality’s role is to help guide and constrain our self-interest and not further it, as well as the fact that altruism is possible and very common, we see that ethical egoism is implausible. All arguments presented thus far have been deontological.

Utilitarianism argues that right and wrong is determined by the overall goodness of the consequences of an action. The idea is that all actions lead to an end but there is the highest good (pleasure or happiness). Earlier proponents of the idea proposed an index to maximize happiness to the greatest number. That is, we have to act so as to maximize human welfare and consider including all sentient animals in that matrix too. We do this by choosing the action that maximizes pleasure/happiness and minimizes suffering. Current interrogations of the idea yielded a few results. First, the idea of maximizing pleasure was replaced with the satisfaction of all relevant people’s preferences and interests. Also, a distinction between Act Utilitarianism, which is what has been described above, and Rule Utilitarianism, was made. Rule utilitarianism was to address the concern that act utilitarianism may result in harming one for the greater good. Rule Utilitarianism advocates that rules of governing society should be such that they result in the greatest good for all. This may however also create a deification of rules. A more realistic proposal is the Quality of Character Utilitarianism. This proposes that the primary objective of the moral assessment is neither actions nor rules, but qualities of character. The idea is that our primary duty is to develop qualities of character – dispositions of thought and feeling – whose possession is likely to produce the greatest overall utility. Such an account would be supposed to be grounded in a more realistic view of human rationality, and of the springs of human action, that is presupposed by act-utilitarianism. For utilitarians, no action is intrinsically right or wrong,  and no persons preference or interests carry greater weight than the other.  It will be difficult to apply utilitarian principles after the fact so utilitarians use rules of thumb to assess their actions.  Democracy and economic principles reflect utilitarianism.

The final idea that I will review is Contractarianism– the idea that principles of right and wrong are those which everyone in society would agree upon in forming a social contract. Contractarianism holds that persons are primarily self-interested and that a rational assessment of the best strategy for attaining the maximization of their self-interest will lead them to act morally. The idea is to start by thinking, hypothetically, that we are at the beginning of forming a society and we want to know which principles of justice to ground the society. However, in this ‘original position’ we do this without knowing which position we will occupy in the future society; we don’t know if we will be rich or poor, male or female, old or young, etc. We then advocate those principles that will be in our self-interest (though we don’t know what ‘self’ that will be). This forces us to be impartial, and if we are rational, to propose universal principles. The idea of the thought experiment is not to think that we actually begin again and construct a society from scratch. Rather, we can use the thought experiment as a test of actual principles of justice. If a principle is one that would not be adopted by people in the original position, behind the ‘veil of ignorance’ (about who they will be), then it is unjust and should be rejected.

From a humanistic standpoint, both deontological and consequential theories are up for debate as long as humans are at the centre of the decision making. However, humanism has other values such as empathy, justice, freedom, etc., which will rule out all deontological arguments. Both consequential theories offer arguments that play into what defines my humanism. As primary agents of change, I believe our goal is to create a system that considers the needs of the few with respect to the needs of many. We need a system that has checks for bias and allows growth as our societies evolve. A combination of the tenets of quality-of-character utilitarianism: the ability to develop traits that will generate the greatest good for all, and the unbiased solution of contrarianism, I believe will be the best way forward. The only way however for a collective agreement or movement in a positive direction with respect to our understanding of morality is for the subject to be taught as early as possible. Morality and ethics should not be treated as high school or university subjects but as ideas that children as young as can communicate are taught. To build quality of character as is required in utilitarianism, parent, family and the entire community has to play a role. We have to be each other’s keeper, constantly reminding each other of the greater good – the well-being of the ecosystem that supports us.