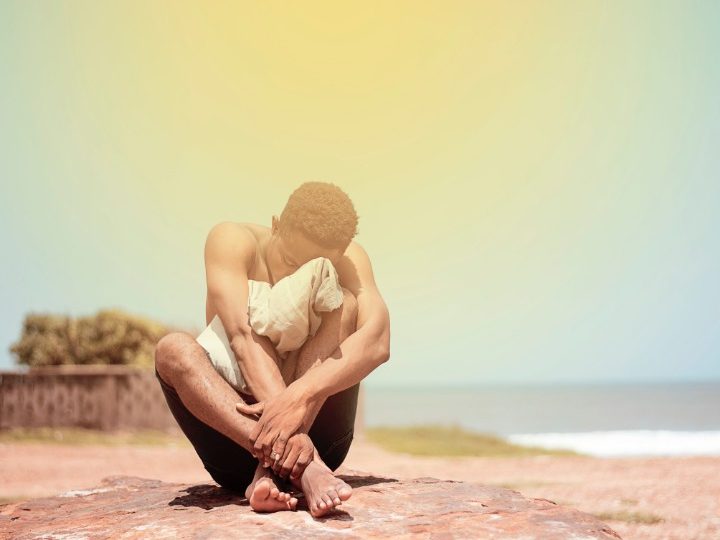 Once upon a time, I grew up thinking that, the world is made up of just men or women and that for one to have feelings for the same sex, I felt it was abnormal. I come from a very religious and conservative Muslim family. As early as age 6, I liked boys my age and almost all my friends were girls. I was comfortable with house chores and will always love to play with girls rather than boys my age. At age 12, I was sent away to live with my sister in Takoradi. It was in T’adi, as it’s popularly called, that I discovered that, same-sex relationships existed, but I was still in denial. Coming from a religious family, I was brought up thinking that it was a sin.

I completed my elementary school and left Takoradi for Akwatia in the Eastern Region. Over there, the attraction to men was becoming stronger and I was afraid to even think about my sexuality. Throughout my teenage years, I tried to engage in straight relationships, but I never had feelings for the opposite sex.
My sexual orientation was still not known to me because, even though I had no feelings for the opposite sex, I could not define what I felt for guys of the same sex.

In secondary school, I refused to bathe with all the guys, as is common practice, because, I was very much attracted to some of the guys, my eyes fixed on their nice muscular bodies and then I get an erection. No one saw my erections, or should I say I hid it well with my sponge.
It was the second term in my final year that I experienced what same-sex love was. One of my mates named Clifford (Not his real name) from Kumasi had a crush on me and couldn’t tell me. One afternoon, he followed me to the washroom and realizing I was alone pounced on me and kissed me. I was shocked but at the same time, I felt so relieved because there is someone who feels the way I do. We kissed again and become lovers until we completed school.

Having experienced what I thought was an abomination, I prayed and fasted so that whatever was wrong with my sexuality, could be corrected by God. I sometimes cried in my room because I felt different and I was not happy. This situation continued until I completed my course at the University. Upon completion, I had the opportunity to travel abroad to Denmark. When I reached Copenhagen, I discovered myself and came to accept who I am. On my return, I lived differently, even though I didn’t have a boyfriend, I didn’t also worry about my sexuality anymore.

I started work with a micro-credit bank in Accra and this is where my headaches began. In our family set-up it is believed that, once you have a job and have reached a certain age, marriage is the next thing to do. I had no intention of getting married but my uncles, aunts and my Dad started putting pressure on me to get married. This issue continued until the third year of my working life when my dad called me and informed me that he had arranged and gotten me a wife. In the beginning, I refused but I was alone in fighting it. I had two options, the first was to leave the country but I didn’t have enough funds to run away and the second was obviously to stay and marry. I agreed to get married since I could not come out to tell my folks that I preferred the same sex. On my wedding night, I could not have sex with my new bride. I assumed that it may be because we were both tired. The next morning, I realized that I still couldn’t get an erection so I quickly confided in a friend who introduced me to some aphrodisiacs so I started using them. I was using All these imported Chinese sex enhancements, so I could get an erection. I was able to have sex with her a couple of times within the month and she got pregnant. Hallelujah!!! That was what saved me. (Un)Fortunately for me, her pregnancy came with complications, so I was free from her until somewhere in her final month. I continued using the aphrodisiacs until we had our second and third children. I stopped taking the aphrodisiac because I started experiencing some numbness on my left limb so I checked with a medical doctor and he told me it’s the effects of the medicines.

For close to four years now I have stopped taking the drugs and I don’t get an erection around her. I have a boyfriend I am seeing and just thinking about him gives me an erection. I have not had sex with my wife in about 4 years and she has even reported me to her father that I don’t sleep with her. This resulted in her father reporting to my dad who called me to know the reason. I couldn’t give him any reason, so he also informed my elder brother who is a lawyer. My brother sent private detectives to find out if I was seeing another woman or not. The detective was able to know my truth and told my brother. My brother had to call a meeting and even though he couldn’t mention it to our parents, he told me point-blank that, if I don’t stop what I am doing with guys, I have myself to blame if anything happens to me. I am now in a dilemma because, I have thought of divorce, but when I think about the kids, I rescind that decision. I still don’t have any feelings for my wife. I continue to live a double life which I am tired of. The firm I work with now is a family firm, the only way I could be free is to get a new job and then I could move out of where I live currently with my wife and children. I am not feeling safe at my workplace because my brother works there and my movements are being monitored. I am feeling suffocated honestly. As for my kids, I have always supported and loved them and so it doesn’t matter whether I live with them or not, I will continue to be there for them.

*Mohamed Muni is the pseudonym of the author who prefers to remain anonymous given the nature of  his story and the environment we find ourselves in.